Share a memory
Obituary & Services
Tribute Wall
Read more about the life story of Eileen and share your memory.

Eileen Anna Thayer, died Thanksgiving Evening, November 25th at 5:15 P.M. in her home at 1548 N 11th Street, Nebraska City, Nebraska. She was born February 9, 1926 in Sterling, Nebraska of parents, John and Minnie (Mischnick) Broers, who resided at the time in Burr, Nebraska. She moved to Nebraska City at a young age and met and married her high school sweetheart, Harry Wayne Thayer on May 10, 1946. They were married for 54 years before his untimely death on November 21, 2000, at the age of 74. They were married in Nebraska City, where they resided during the early years of their marriage. Eileen was 96 years and 10 months at the time of her death.

Eileen was preceded in death by her husband, Wayne and their youngest son, Kent (2019). She was also preceded in death by both parents, her two brothers, Donald and Delmar, and two of her sisters, Freda and Carol. She was a dedicated wife, mother, housewife and homemaker. She is survived by three of her four sons:

Donald Wayne (and Cathy) of Fort Worth, Texas;

Jeffrey Lynn (and Dana) of Torrance, California; and,

Eileen served many hours as a volunteer worker in hospitals and other volunteer agencies. She was a long-standing member of First Presbyterian Church in Nebraska City. For twenty-two years and 3 days she pined continually for her sweetheart, Wayne. She is now reunited with him in Heaven. She graduated from Nebraska City High School and was a dedicated Pioneer to the end.

Visitation will be on Friday evening, December 2 from 5:00 p.m. to 7:00 p.m. at Gude Mortuary, 403 South 9th Street, Nebraska City.  A Memorial Service will be held at 11:00 a.m. on Saturday, December 3 at 11:00 a.m. at Gude Mortuary.  A reception will follow at First Presbyterian Church, 1005 First Corso, Nebraska City.   She will be interred in Wyuka Cemetery with her late husband Wayne. Services will be officiated by her eldest son, Don.

To send flowers to the family or plant a tree in memory of Eileen A. (Broers) Thayer, please visit our floral store. 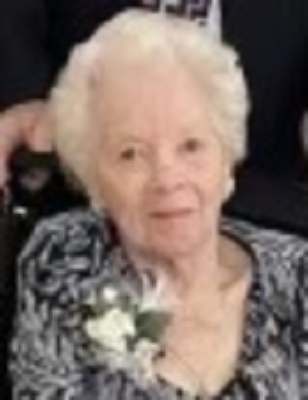