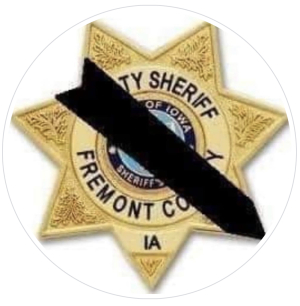 Melvin began his law enforcement career with the Auburn, NE Police Department on December 17, 2007 where he worked for five years.  He later began working as a police officer for the City of Sidney, IA on June 20, 2011.  He started his career with the Fremont County Sheriff’s Department on August 31, 2015.  He was a member of the Sidney Fire/Rescue and the Percival Fire/Rescue.

Melvin met Jennifer Madsen in January of 2012 and they were united in marriage on September 15, 2017 in Shelby, IA.

He was preceded in death by his father in 2013; Grandpa Everett Lyons and Grandpa Gary Richardson.

A Funeral Service will be held at 11:00 a.m. on Saturday, June 18, 2022 at the Sidney High School in Sidney, IA.  Burial will follow at the Hamburg Cemetery in Hamburg, IA with Law Enforcement Honors by the Iowa C.O.P.S. (Concerns Of Police Survivors).

Memorials may be given to the family for Melvin’s daughters future education;  C/O Malvern State Bank in Malvern, IA.

To send flowers to the family or plant a tree in memory of Austin "Melvin" W. Richardson, please visit our floral store.